The story began during the winter of 1963-64 when a group of residents gathered at McCormick’s Restaurant on Riverside Drive. Vince Dee, Gordon Cerow, Helene Cobb, Jackie Vrooman and Larry Balcom recognized the importance of preserving local history and took the initial steps to make the museum a reality.

In April, the New York State Education Department issued a provisional charter for the organization. On July 4, 1964, the Thousand Islands Museum opened its doors at the Town Hall. That summer the first classic boat show was held. Little did the group realize what an exceptional institution and tradition they had created. 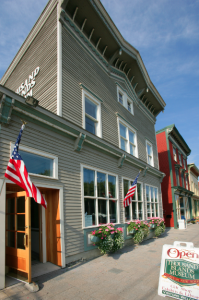 Over the next several years an Art Show and an Antique Show & Sale were added to the annual Antique Boat Show. Vince Dee became the first museum president and the T.I. Museum Craft School opened on the second floor under the direction of Emily Post and Jean Holt. On February 27th, the NYS Education Department issued an absolute charter, making the museum fully accredited. In 1968 a special exhibit put on by Gordon Bennett and Harold Herrick would lead to the annual Decoy and Wildlife Art Show. In 1970, the Muskie Hall of Fame opened under the leadership of Ed Bannister.

To accommodate its varied and growing exhibits, the Museum set up divisions, including the Craft School and the Shipyard Museum in the late 1960′s. Each division ultimately became an independent entity. An absolute charter was granted to the Shipyard, how the Antique Boat Museum in 1986. The Craft School, now the Thousand Islands Art Center, home of the Handweaving Museum, was granted a charter in 1990.

Over the years the events and programs that help define the Thousand Islands Museum increased in number and quality. An annual Shore Dinner, Christmas Festival of Trees and Craft Show along with Hashing Over History in the winter months and History at Noon in the summer have been added. History Boat Tours during July & August are very popular. New in 2012 will be programs on Saturday with topics from vintage quilts to decoy carvers and wildlife painters.

Today the museum at 312 James Street presents a modern gallery of permanent and rotating exhibits on the first floor along with a Research Library. The second floor houses older decoys, a room dedicated to Sam Denny, the Muskie Hall of Fame and a display by the local diving club. The library, includes documents, clippings, scrapbooks, photos, maps, books and printed local histories along with a display honoring local servicemen and women.  A 911 display with a piece of steel from the Twin Towers is now a part of the library. It is a valuable resource for students, professionals, historians and scholars. Stop by to visit, and be prepared to stay awhile. You have discovered one of the area’s best kept secrets.

Museum Mission:The Thousand Islands Museum is an educational PUBLIC TRUST dedicated to the continuing collection, preservation and exhibition of artifacts and historical records of the St. Lawrence River and Thousand Islands communities.