The Thousand Islands Decoy Collectors Association (TIDCA) was organized in summer 1992, largely through the efforts of Larry Lunman and Bob Rayfield, to bring together individuals who share a common interest in the history of decoy carving and waterfowl hunting along the St. Lawrence River. In addition to the Clayton Decoy Show held each year in July, TIDCA members have met once or twice a year to attend decoy presentations, share information, and participate in displays and contests. Vintage decoy displays and contests have been a feature of most meetings, with the intent of encouraging members to bring choice examples from their personal collections to be studied and enjoyed by all.

In spring 2009, TIDCA was reorganized under the mantle of the TI museum, and individuals who wish to become or remain members of TIDCA can do so by joining the museum. The goals of the association have remained the same, and are focused on discovering and sharing information on the decoys and decoy carvers of the Thousand Islands area. In recent years, two events have been held annually, both open to the public. The first event is a meeting held the first Saturday of March, the second includes displays presented at the Clayton Decoy Show held the third weekend in July. Displays of decoys by TIDCA have been presented at the Clayton Show each year since 1994. In 2013, TIDCA’s involvement in the Clayton Decoy Show was expanded to include a vintage decoy contest.

Declines in corona virus cases and concerns in summer and early fall 2021 lead to hopes that 2022 events could be held without major problems or concerns.  Unfortunately, Delta strain cases increased later in fall 2021, followed by the Omicron strain surge in December 2021 and early January 2022.  Although it had been speculated that the Omicron strain surge should substantially decline by late winter 2022, it was decided that the spring meeting scheduled for early March was just too risky.  Accordingly, the spring TIDCA meeting scheduled for March 5, 2022, was cancelled.

Fortunately, speculation about a decline in the Omicron strain proved correct.  New cases declined steadily through late winter and spring, allowing the 2022 Clayton Decoy Show to be held as scheduled on July 15&16.  TIDCA involvement in the 2022 Clayton Show included a 2-day display of decoys and carvings by Ed Sweet, and a vintage decoy contest on Friday, July 15.  Materials used in the Ed Sweet display, and photos of the display and decoys contest have been added to the page of “Previous Clayton Shows” and can be accessed using the links on this page.

Similar to previous years, the meeting will start with decoy displays and an informal gathering, followed by a slide presentation.  The meeting is open to the general public, free of charge, and refreshments will be served.  Please feel free to spread the word and invite anyone you feel may have an interest in the decoys and history of our area.

A power-point slide show will begin at 2 PM.  Topics to be covered in the 2023 presentation have not yet been finalized, but are currently scheduled to include updates on Ken Harris, Donald C. Davis, and possibly William O. Massey.  In addition, a review of some selected decoys by unknown carvers and some decoys from marked or branded hunting rigs has been planned.  Photos and brief notes about each of the Selected Decoy Styles and Rigs that were being considered can be accessed by clicking on the highlighted link in this sentence.  If you have information about any of topics, decoy styles, or decoy rigs, please contact Tom Eckert at 315-408-8835.

Uncovering new information about the decoys and decoy carvers of the Thousand Islands takes a lot of work, some luck, and is greatly facilitated by the right contacts.  Beginning a discussion of a carver often encourages those with information to come forward.  Help is needed.  Anyone is welcome to add to our presentations, either as a new presenter or as a source for new information.  Audience participation is encouraged, and anyone with information or photographs of any of the area decoy carvers is asked to bring them along.  Pictures of recently discovered decoys are always welcome.  If you have some news or information that you would like included as part of the meeting, please contact Tom Eckert prior to the meeting at 315-408-8835.

Decoy displays are a traditional part of the TIDCA meetings.  The intent of these displays are to provide people an opportunity to examine decoys by various makers, and to better understand the variations in style and construction that exist.  The public is invited to bring decoys from their own collections for everyone else to examine and enjoy.  This includes decoys that they feel fits with the topics of the slide presentation, as well as decoys they would like to have identified and appraised.

Decoys and carvings specifically wanted for the 2023 spring meeting display:

TIDCA involvement in the 2023 Clayton Show will include a decoy exhibit to be displayed all day Friday and Saturday, and a decoy contest to be held on Friday.  Help with setting up the displays, registering the contest decoys, and supervising the exhibits and explaining them to the public, is always appreciated.  If you can help, please contact Tom Eckert (315-408-8835) or the Thousand Islands Museum.

The 2023 TIDCA decoy exhibit will feature vintage broadbill decoys from the Thousand Islands area.  The exhibit will focus on some of the better examples of broadbill decoys by the various area carvers.  Museum members and show participants with one or more choice decoys they would like to be considered for display are asked to contact Tom Eckert (315-408-8835).

The 2023 TIDCA decoy contest will be held on Friday, July 14.  The contest is open everyone, and each person may make two entries in each of the three categories.  A matched pair (hen and drake) count as one entry.  The entries may be brought in person to the TIDCA tables and registered from 9-11 AM, or may be mailed to the TI Museum according to the same procedures established for the Hunting Decoy Contest.

Entries in the contest will be judged by a panel of three experts beginning at 11 AM.  Ribbons will be awarded to the entries judged to be 1st, 2nd, and 3rd, in each category, and the winning entries must remain on display until 5 PM Friday.  The contest categories selected for 2023 are quite broad, and were intentional chosen that way to encourage more participation.

The three 2023 contest categories are:
1.   Chauncey Wheeler hunting decoy:  any style or species of designed for hunting use.
2.   Vintage Ontario decoy: any maker or species, pre-1975.
3.   Vintage factory decoy: pre-1975; any factory, style, or species. 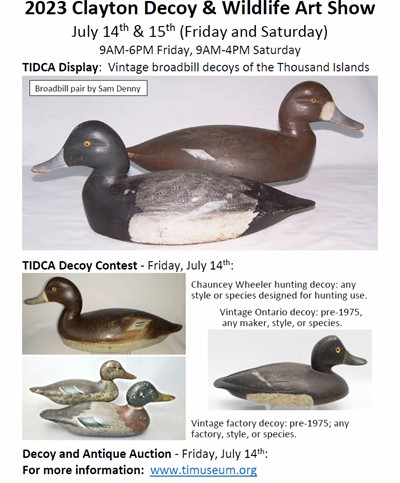